Last year, I took part in the local election process in Aarhus.

Denmark has local elections (municipal and regional) every four years on the 3rd Tuesday of November. Yes, that day. You can already book your day in the calendar if you feel like it.

To begin with, each voter receives his electoral card by post. The card would indicate where is your polling station as well as the table where you have to go.

Like most public Danish events, they will rely on the very strong culture of volunteerism. Authorities will ask for the contribution of citizens to man the polling stations. It’s only the “management” that would be professionals, aka public employees. That’s democracy. The municipality of Aarhus (and most of the other Danish municipalities probably) has opened a section of its website to allow people who would like to participate during this day to register.

You have to register with your CPR and NemID (for those who don’t know, the CPR is a national identification number issued to anyone legally residing in Denmark. If you live in Denmark, you have a CPR, and this CPR references your address, your telephone numbers, your possible trade union affiliations, for whom you work, etc.).

Conduct of the election

Voting begins at 8 a.m. with the polling station’s chairman ringing a bell.

Voting in France is extremely codified:

All up to the way you have to put the ballot in the box (a scrutineer stands in front of you, his hand on the ballot box which has a counter and when the ballot is passed, the scrutineer must say in a distinct way “Voted”).

This makes it quite difficult to make a mistake in the vote count: each ballot box is clearly identified and the number of envelopes and voters counted.

In Denmark, the voting boards are distributed according to the names of the streets.

Each voter arrives in front of the table assigned to him, gives his electoral card and proves his identity by indicating his date of birth. As per law, we should be able to ask for another proof of identity if need be, but in fact, we never do. We just don’t need more. 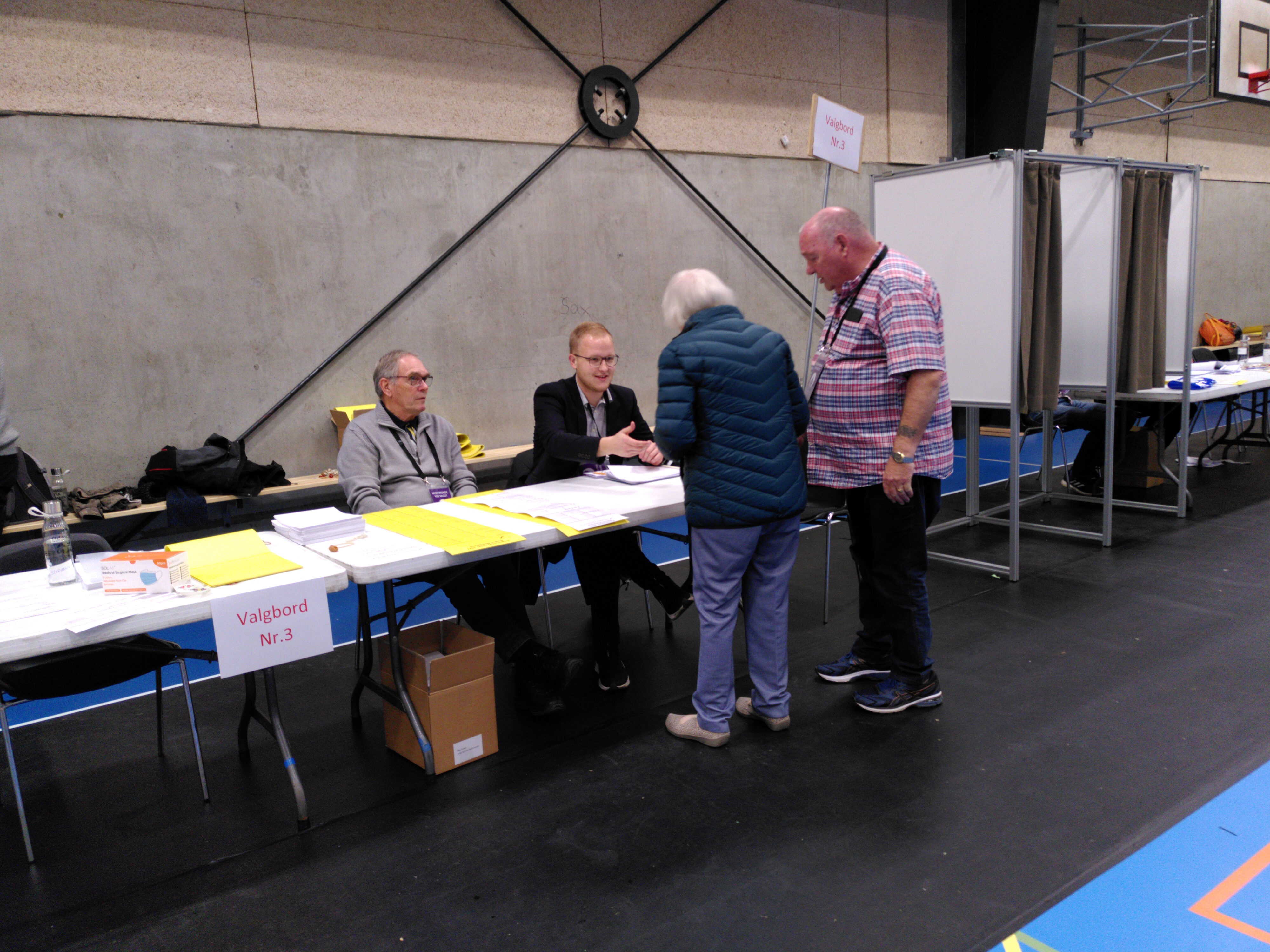 Along the way, the voter’s number is noted to keep count of how many people casted their ballots. And we keep the electoral card. The voter then receives his two ballots: a white one for the municipal election and a yellow one for the regional one.

And we’re not talking about small ballots huh! 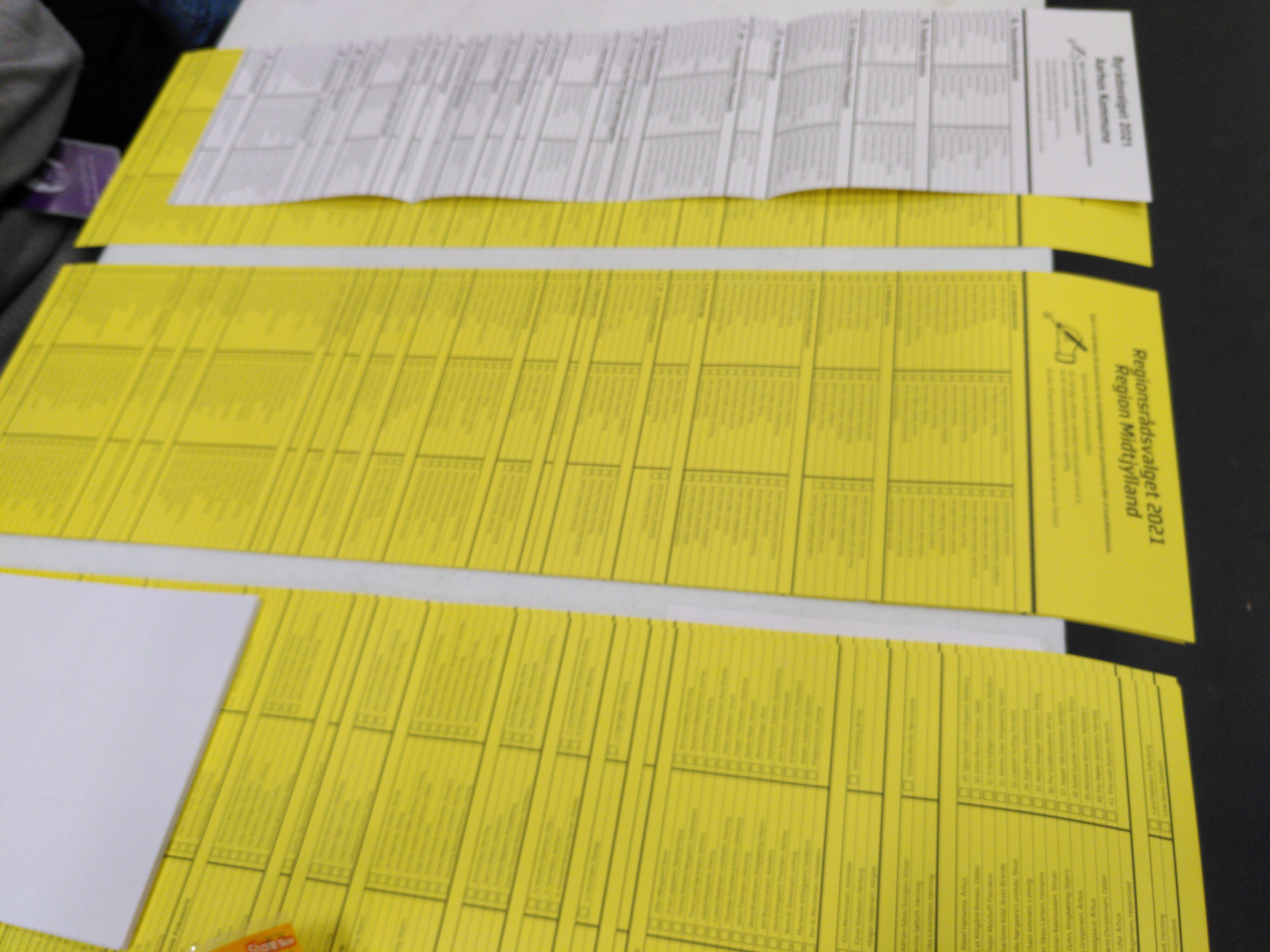 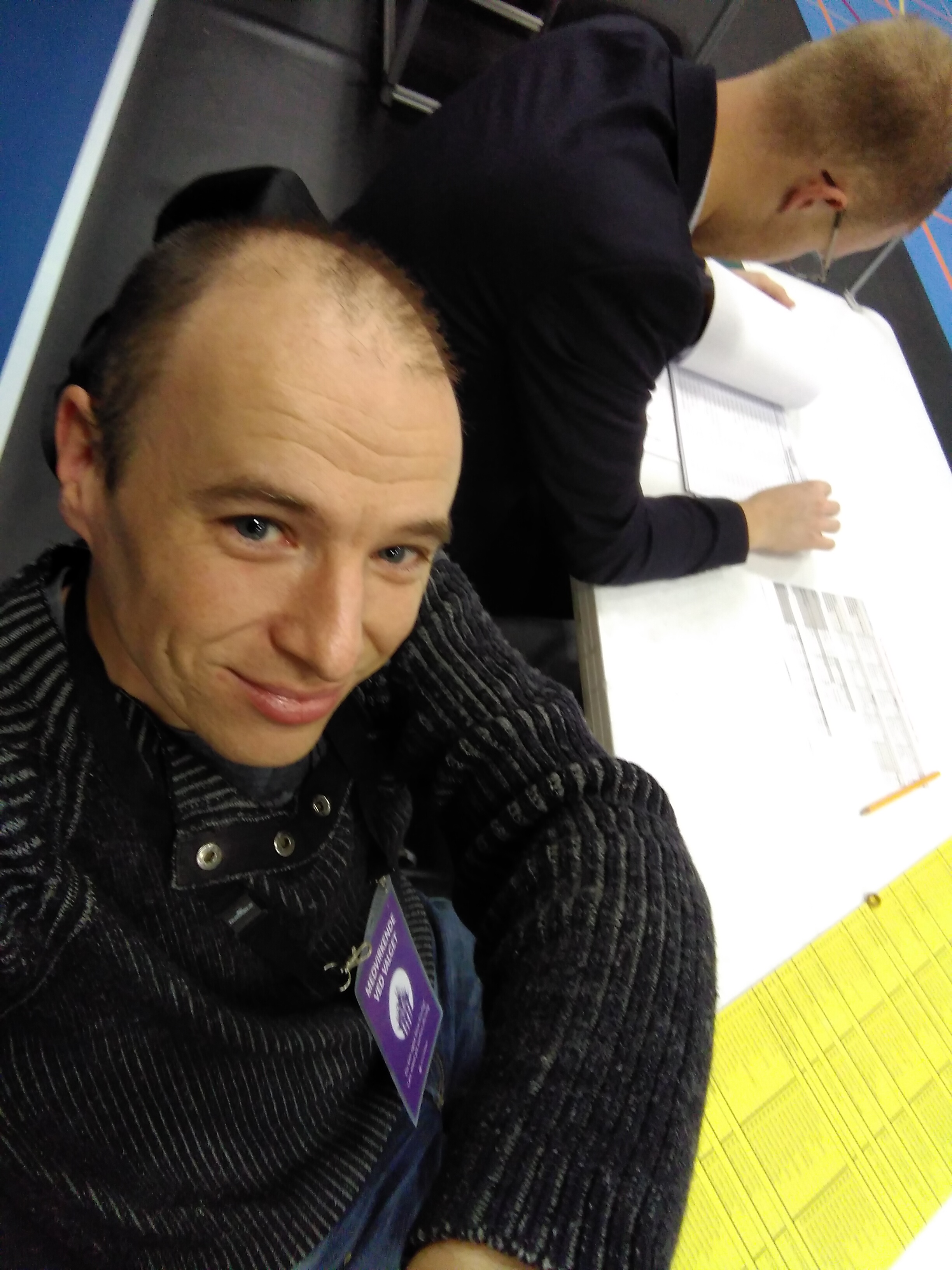 That’s because Danish elections operate under a preferential system, in which one can nominate a particular person within a list, or just vote for a list. Thus, for the entire municipality of Aarhus, there were 200 candidates for 31 seats. And everyone, from Lisbjerg to Viby can vote for the person or party of their choice.

The ballots will then be counted according to the parties AND the individual person within that party.

Once the ballots have been handed over, the person can then go to the voting booth. The “formal” work of the scrutineers is over here.

What ? But everything else like… The envelope, the deposit in the ballot box, the counting in real time?

No. None of that. Buuuuut…

White ballot in the communal ballot box and yellow in the regional ballot box. Only concession to the chaos that will unfold in the evening. 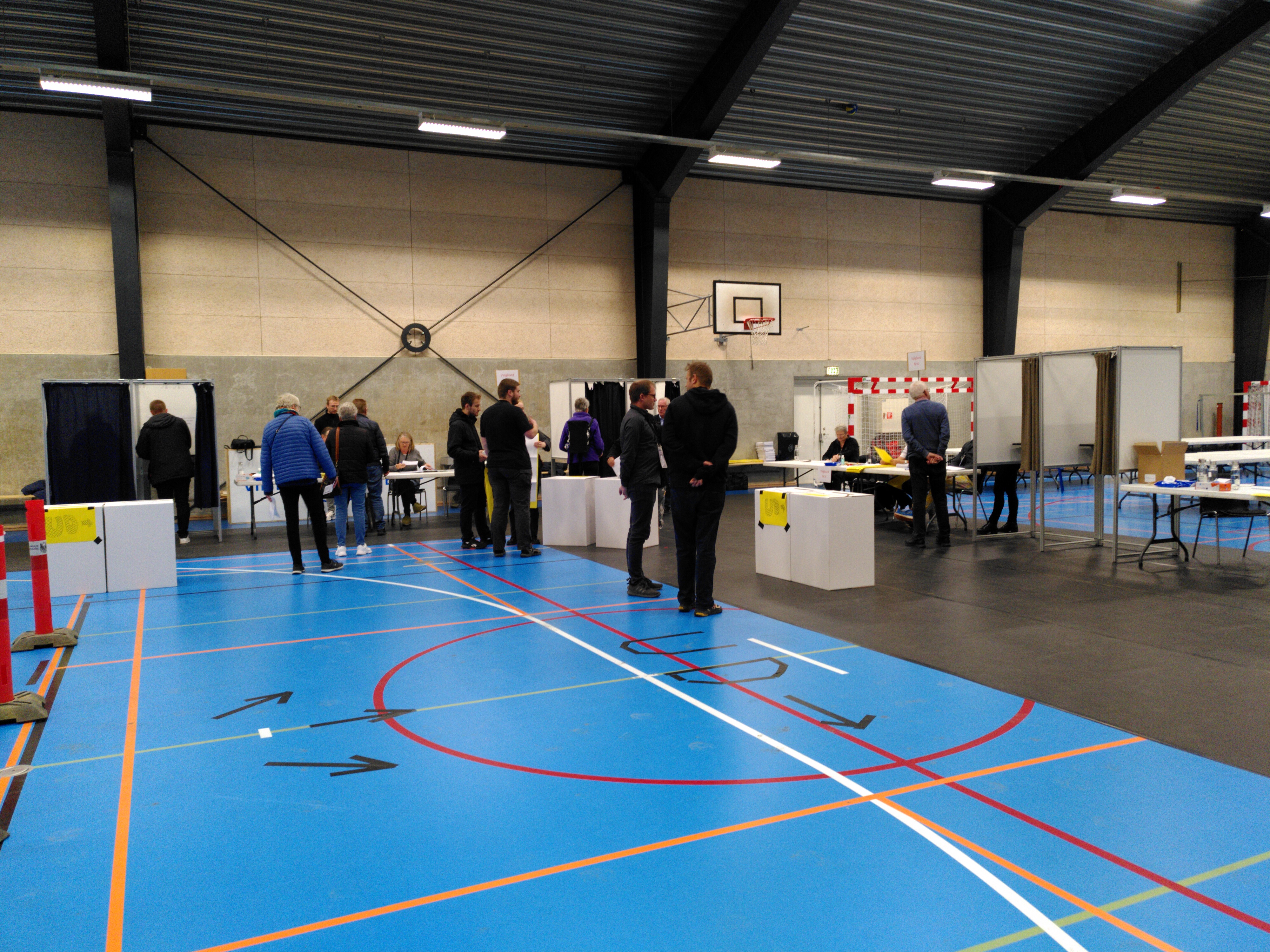 The ballot is simply too big, too long for anyone to know with the naked eye who they voted for.

And the presence of volunteers all around, makes sure that no one stuffs a ballot box or whatever. The whole operation remains public. Again, like many things in Denmark, it’s quite informal. Take it easy.

Aarhus municipality pampers its volunteers. During the various breaks, we were treated to coffee, tea, breakfast (since Danes have breakfast at work…), the unavoidable cake, lunch and dinner.

Needless to say, we can’t complain much.

Voters arrive in waves, first just at the opening with people voting before going to work, then it’s fairly quiet until about noon, when some take advantage of their lunch break to cast their ballots. Then finally the big wave of the evening after returning from work.

And this one was big.

We can also recognize people when they arrive:

Stay for a long time…

The last voter turns up just before the fateful hour but he will take a good 10 minutes to cast his ballot.

Then we will start counting. And there begins a whole different story.

Well, now we’re going to overturn the ballot boxes in large piles on tables and try to sort it all out. 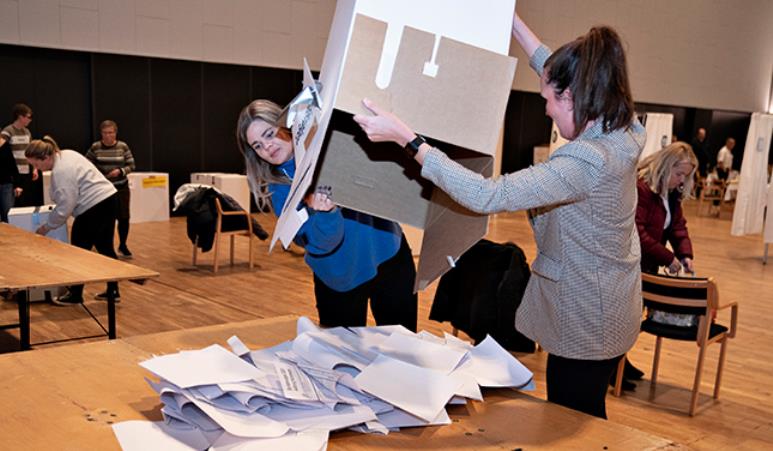 Without instructions. So to start we will make stacks of bulletins. Just that, stacks.

Well, without instructions… Almost. We are told to sort these piles. “Social-Democrats”, “Venstre” (the right-wing party, but which is called “Left”!) or “others”. Brilliant as guidelines huh.

There I tell myself that frankly, it could have been better.

Ah also… no distinction between the voters of this or that table you remember… So in fact it looks like the whole polling station was just one gigantic ballot box. And so if there are any mistakes, it’s hard to see where it went wrong.

All this while walking, running, trying not to disturb others. Chaotic.

But gradually, begin to climb a few piles…

And finally, we count them. To do this, we will make packets of 25 ballots, we put a rubber band. 4 packets, that’s 100, so we put another big rubber band. And as we realize that it is very easy to make a mistake with these huge ballots, we do not hesitate to count each packet several times, just to check.

This is for the sorting of the municipal election. We finish sorting this out around 10 p.m.

The chairman for the polling station in front of the ballots. The first pile in the background, are the Social-Democrates. Followed by Conservatives. No need to count to guess the winners. 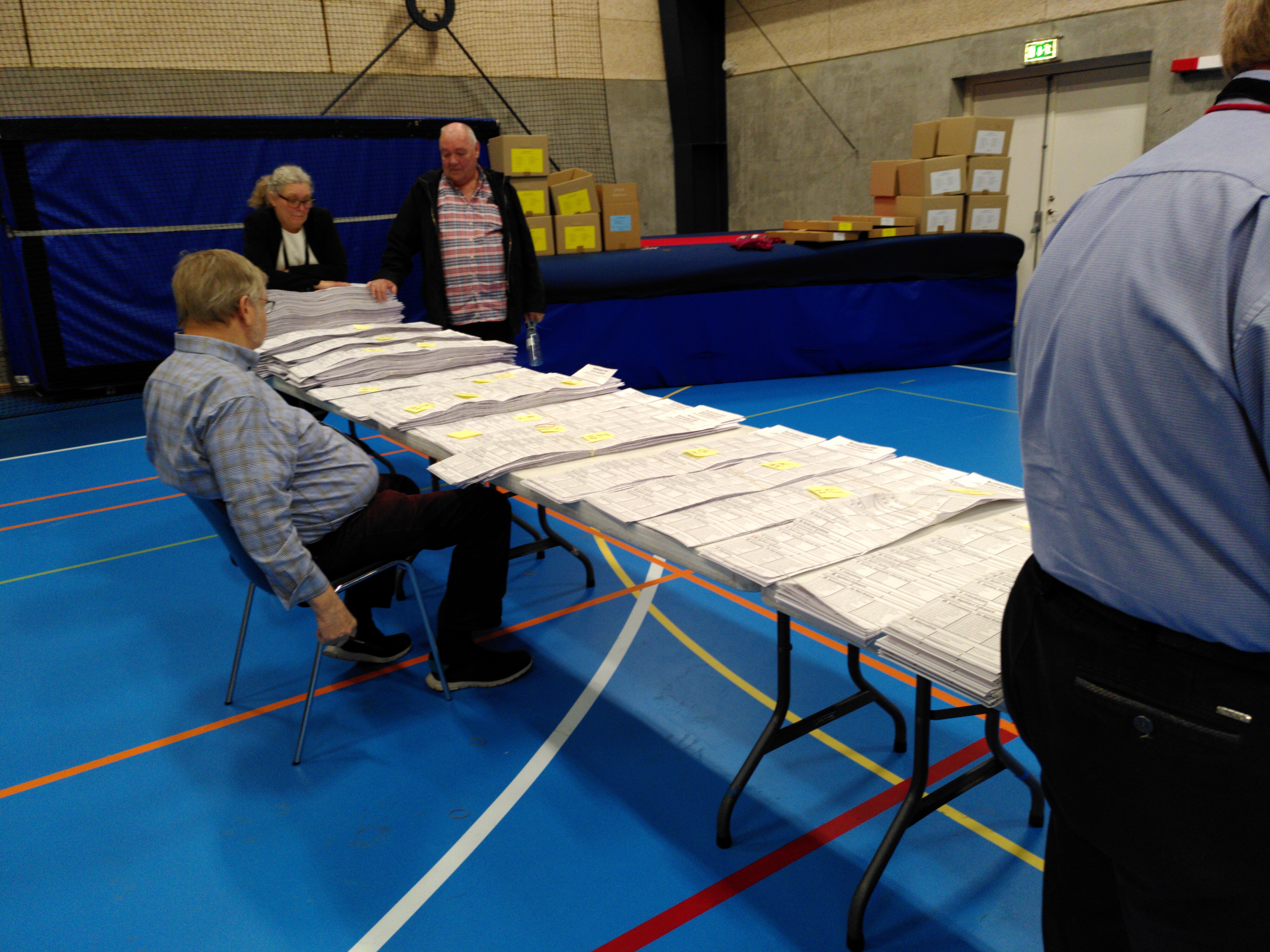 Then we move on to the regional election and there, as we have learned a bit, we start directly by sorting the piles according to the political parties. And it goes faster. Thus, little by little, we make piles. Then we switch to counting, and all of sudden, I found myself responsible for the Social Democrats. But it just “like that”. Uncoordinated. Finally, the polling station officials ask for the figures for each party. And each “counter” gives his numbers, jealously guarding his pile of ballots, because they must not be lost.

All this goes into an Excel spreadsheet sent to the town hall. Around 11 p.m.

At 11:50 p.m., we see the technical manager turn to the president of the polling station, give him a phone.

The vote is confirmed.

We can go home. Just before midnight.

It looks like it’s not too late. In the previous election, the volunteers could not leave until 1 a.m.

Danish politics is actually quite messy behind the scenes.