I have worked almost a year now in DS-Elcobyg, a firm which produces prefabricated concrete elements for buildings. Time to write and say what it is.

A lot of buildings in Denmark are built in precast reinforced concrete elements. Not really strange in the country of Lego. Not really great either because you need a concrete driling machine just to hang a picture of your son on the wall. But it has a lot good sides.

NB : The videos I show in this article are shared on my peertube instance. This means you need a recent web browser to watch them, like Firefox or Chrome.

We produce building elements, yet we are closer to an industrial process. Our manufacturing tolerances stay closer to industrial ones than to building sites'. For example, the tolerance for the elements' main dimensions are +/- 4 mm. A precision level you can hardly reach on a building site. It is way easier to be sure of the position of a rebar on a form table than in the bottom of a casting frame. 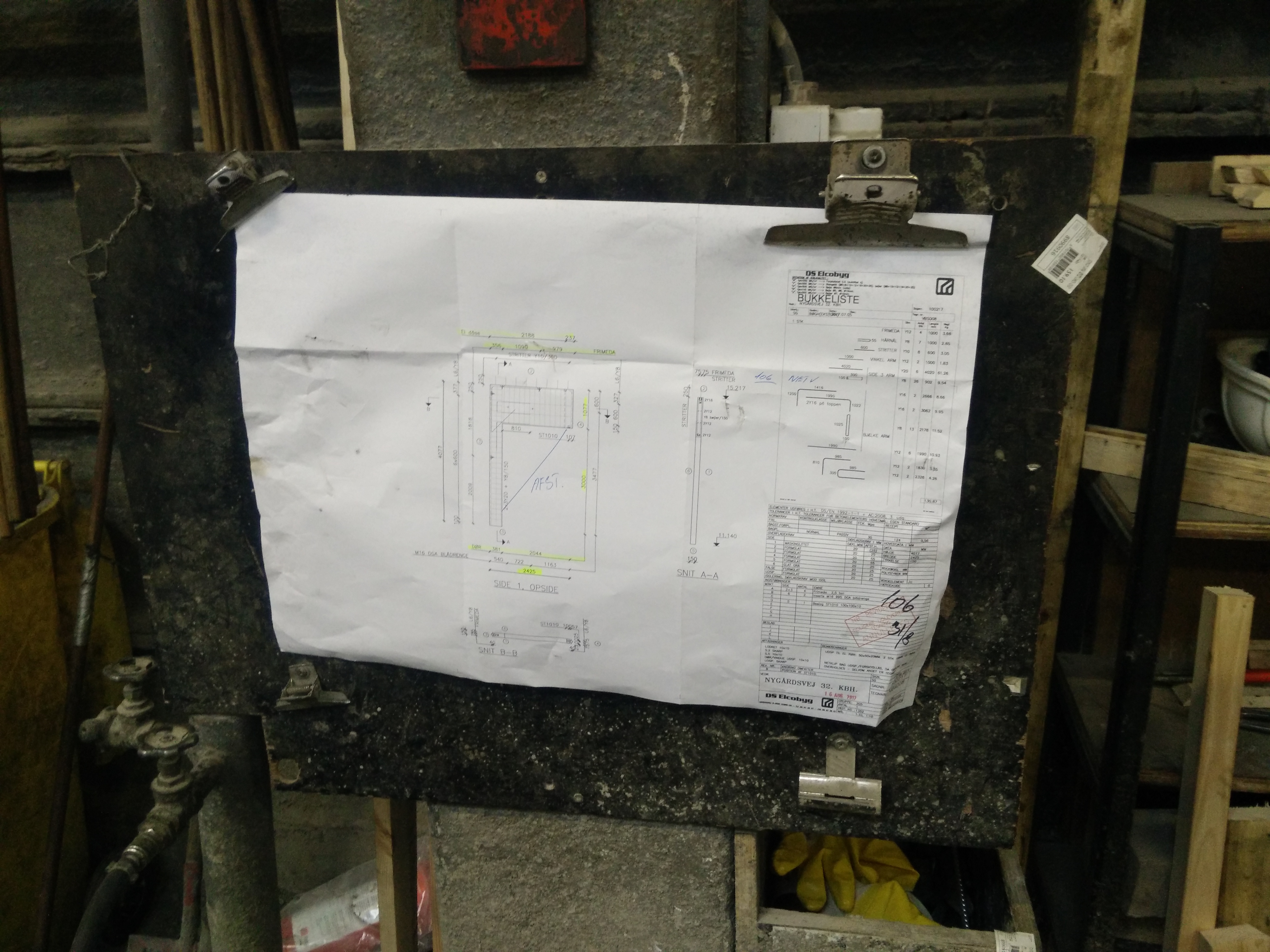 A plan for an element (that I draw). 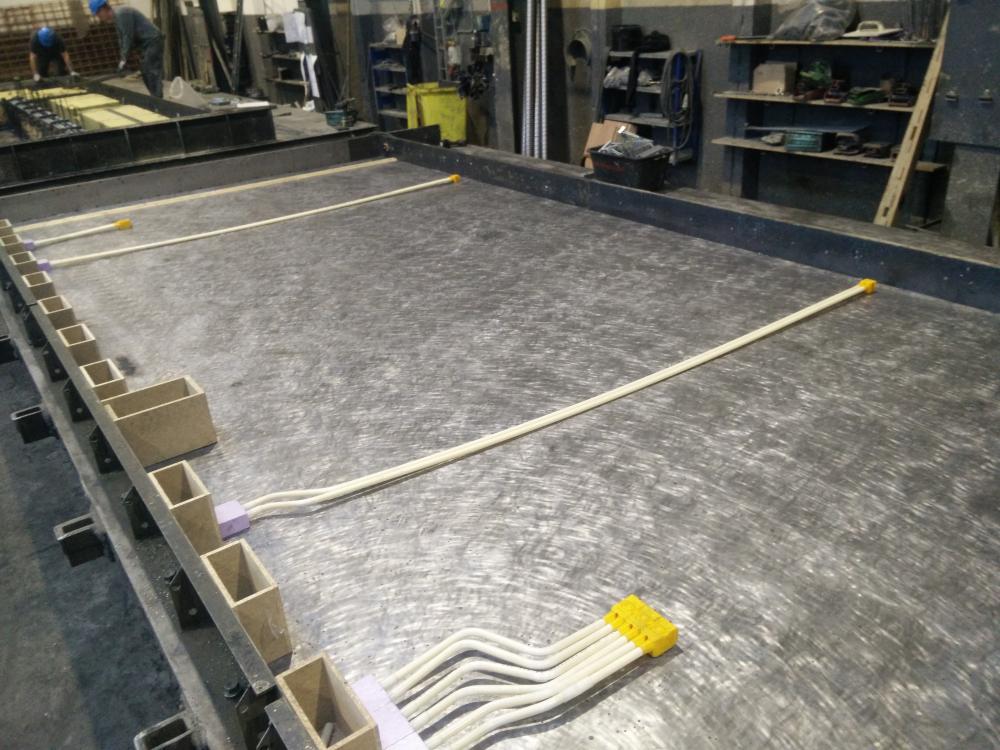 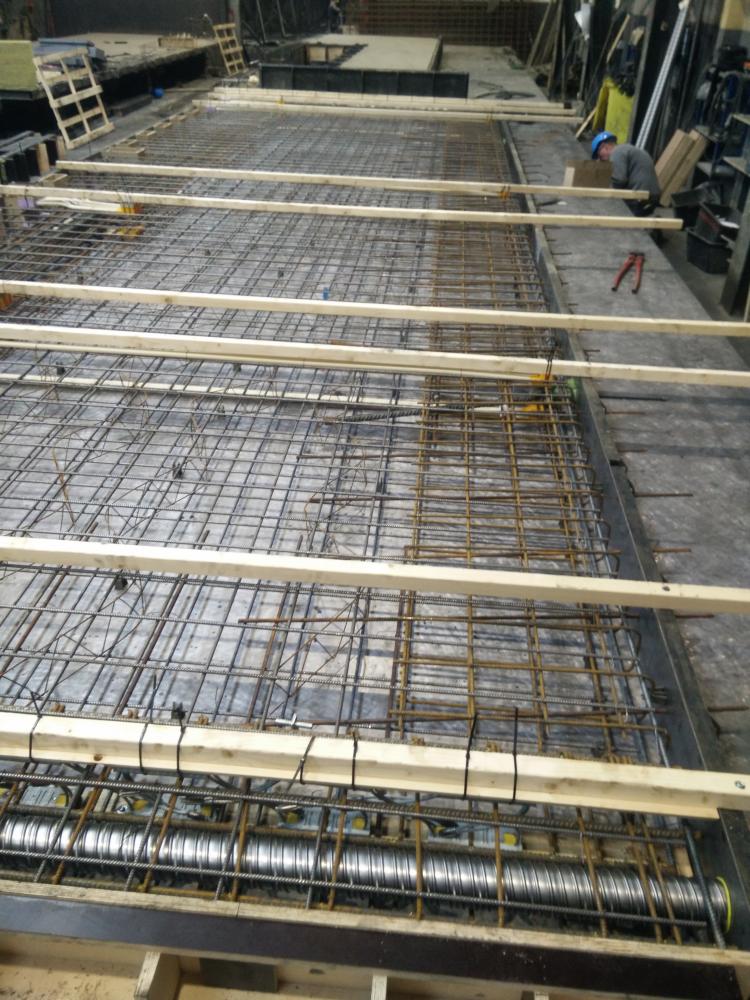 One of the elements I draw, during manufacturing process. The following video shows the first cast.

End of casting for an element.

We have also implemented industrial ways of working, like a quality control, something that does not fit well on a conventional building site.

A safety culture also. I don’t mean that the plant is a safe place where you can release babies. After all, we still use heavy and dangerous machinery. But it is better to fall down from a 50 cm formwork casting table than a 10 m slab formwork. It stays less dangerous than a conventional building place.

We can use special concretes or make our own reinforcement nets.

Here is our net welding machine, that produce our own nets.

This industrial process makes it possible to obtain building elements of better aesthetic quality. Danish (and Scandinavian in a broader sense) design is minimalist and architects like to use rough concrete. Facade walls can also come with their siding and their integrated insulation. 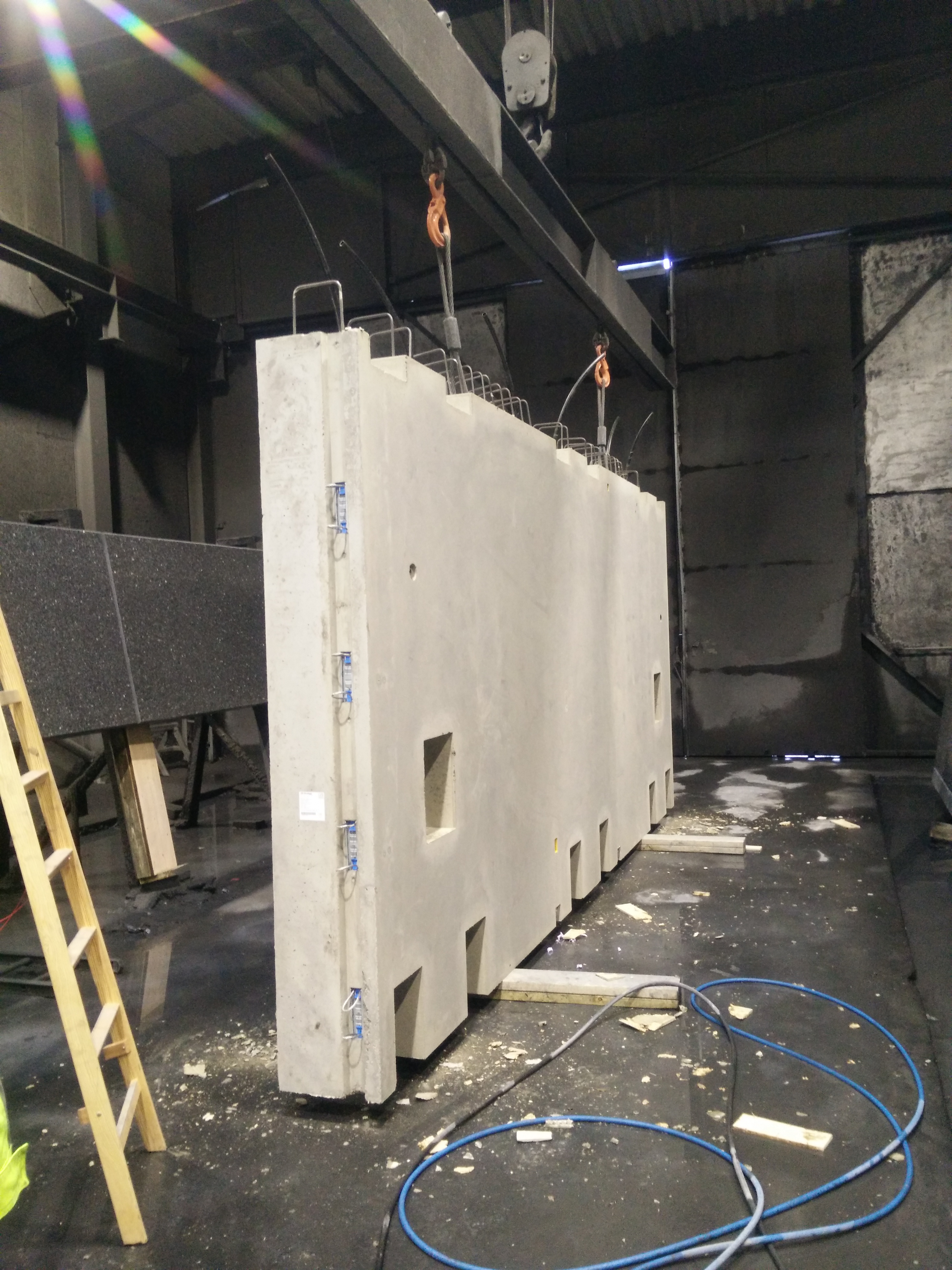 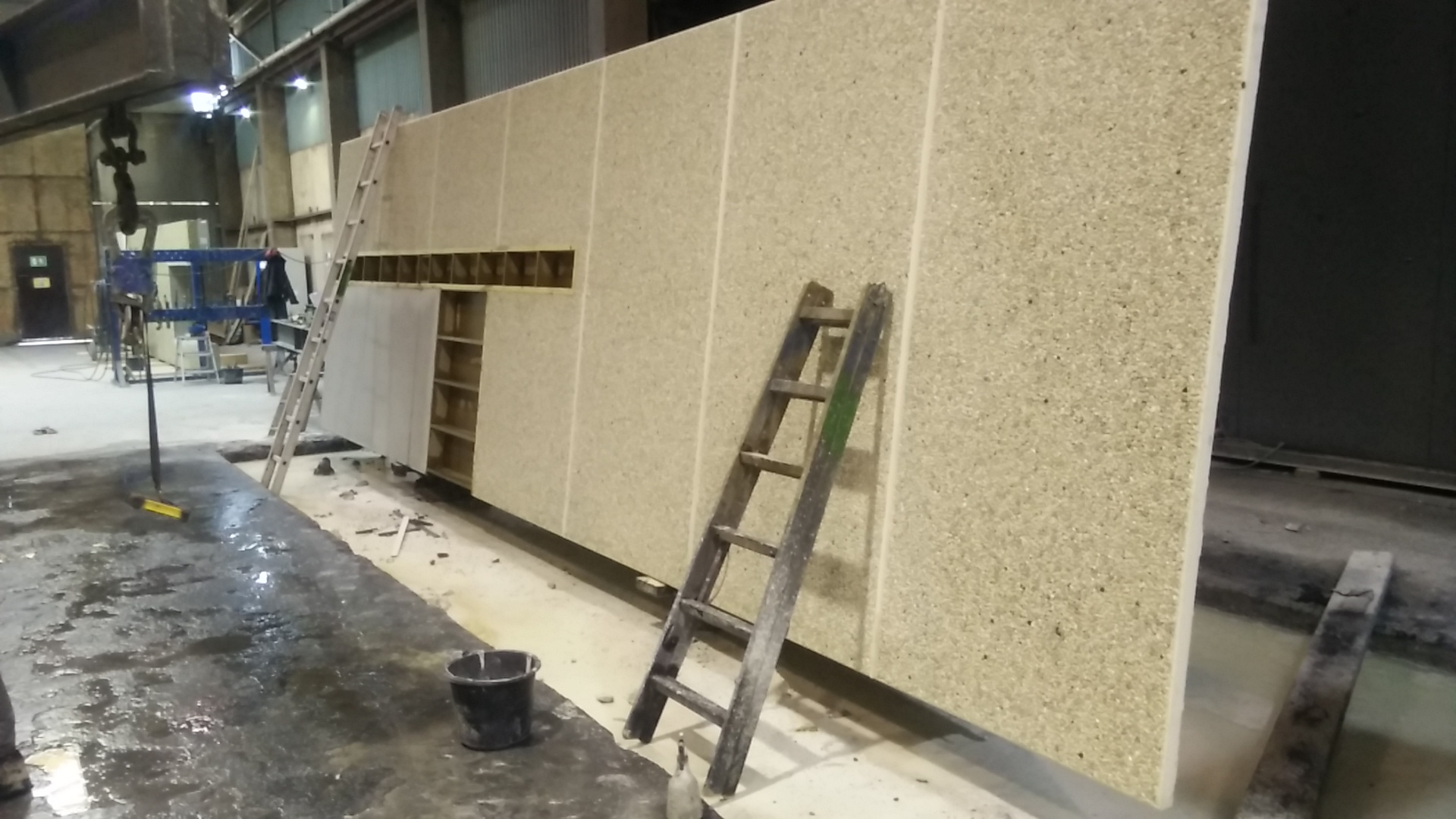 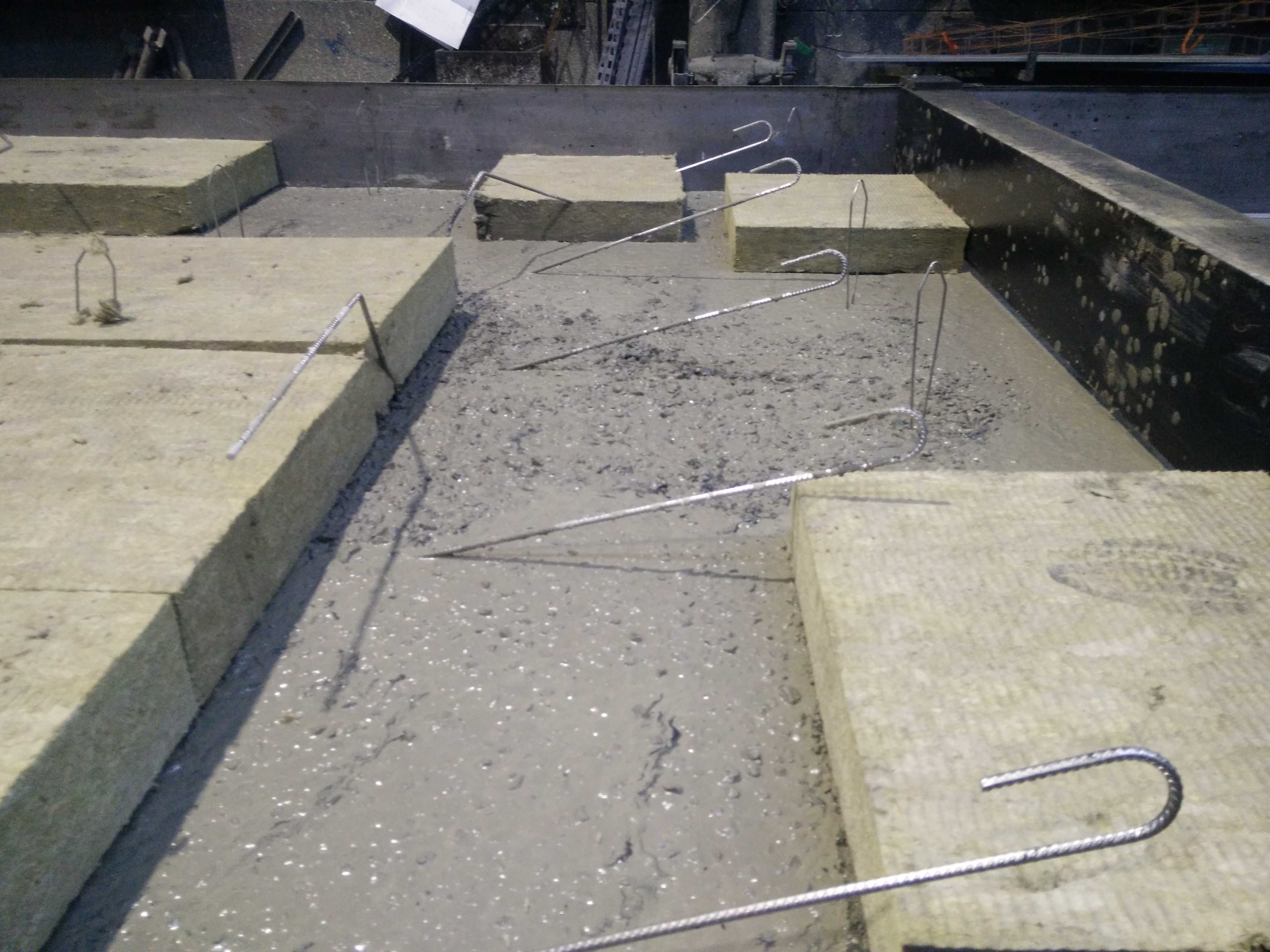 Sandwich-element during manufacturing process. First, we cast the finish slab, with light reinforcement. After half an hour, we can set the insulation and begin work on the bearing element itself. The two parties get linked with links casted in the finish slab.

Logistics becomes an important part of the operations when casting a building of several hundred tons 100 km away from its final position.

Thus, it is necessary to integrate the cost of transport in the prices, to organize these same transports and integrate their constraints in our industrial processes. The maximum dimensions of the elements come partly from the maximum permitted sizes of the trucks. The pieces get out pretty from the factory, but it is not said that they arrive in the same state on the site.

You have to organize, manage and plan moldings. This whole aspect keeps busy a full-time logistics manager here, and she intervene at every time in the process, from the moment we begin to divide the building in elements to delivery and coordination with the mounting workers.

Dividing the building in modular elements has its plus… but also its faults. Like we get rid of much of the “crafty” aspect of a building site and inherent problems, to just end up creating new ones.

Logistics impose constraints, but so do our own facilities.

Those maximum must also pass well with the project and its structure.

We can mold several elements of average dimensions at the same time. But the largest and heaviest have to be molded on specific tables, meaning again once at a time. Once again this requires a lot of organization on the part of the production and the logistics managers.

Dividing in elements makes it easy to lose the global idea of the building. One can easily forget that this element will not be only a concrete slab. It will be a bearer element (or not) and its reinforcements have to be calculated according to its maximum loads.

During drawing, one will naturally think reinforcements in a basket form to contain the concrete. It is harder to think about the path of the loads accross the building and the reinforcements needed for it.

Dividing in elements all of sudden requires also specific inclusions that have no other purpose out of allowing it:

All of this uses space in the concrete, space that we have to estimate and that collide with other inclusions (reinforcements, insulation, etc). Space that maybe, we don’t have ! 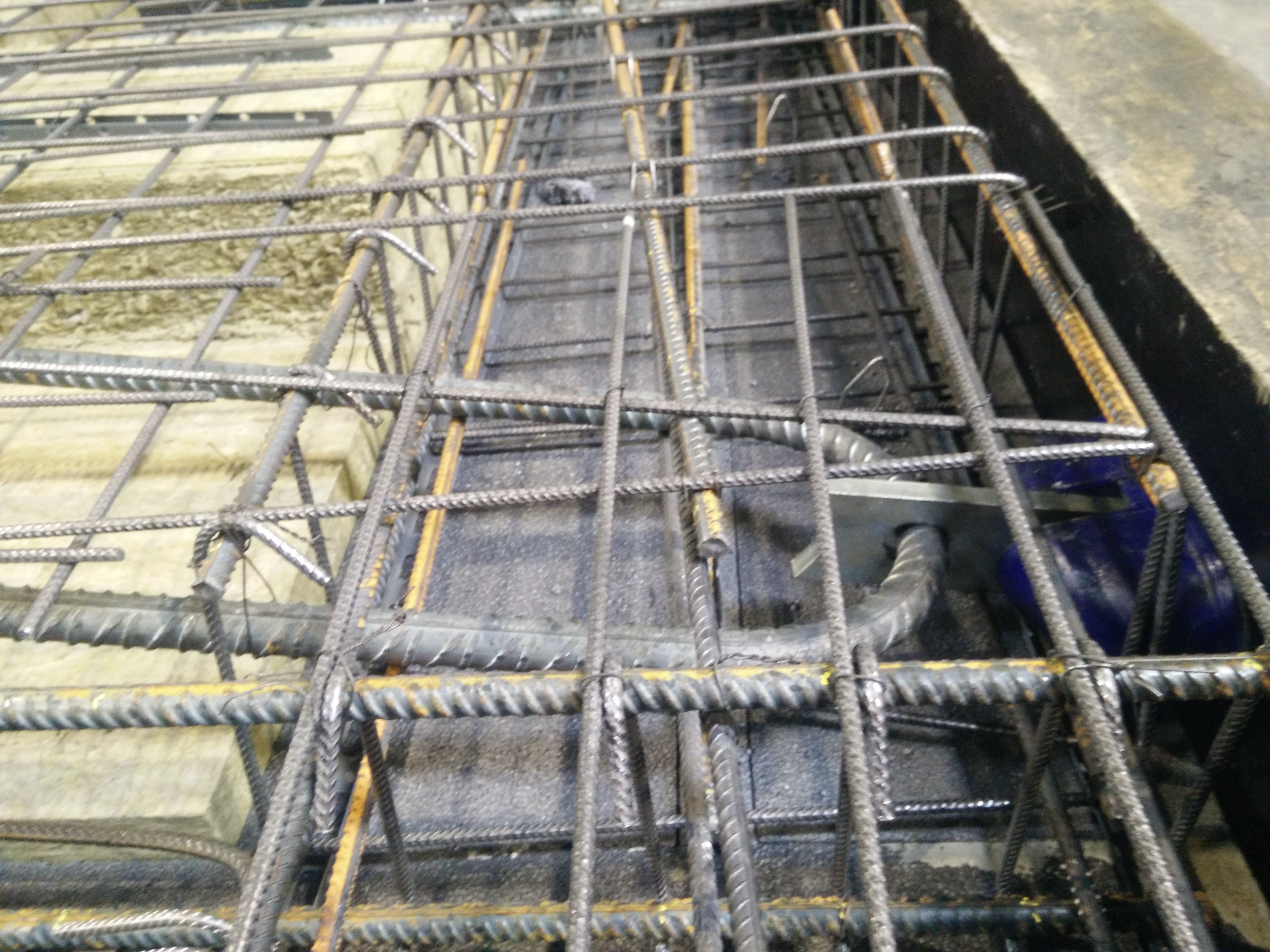 Here, we needed to cut the insulation to let the lifting ankers.

Using prefabricated elements is faster, but you need plans sooner. And they have to be coherent !

When casting on site, one can easily adapt, almost to the last moment. With prefabricated, you have to be pretty much rigorous. If an element is just 1 cm longer, it can create troubles. And you can easily play sudoku: slightly changing one element might mean a whole serie to modify, in a domino move.

With prefabricating, each element, walls, slabs, beams can all come from different manufacturers. We can also cast the building the way we prefer. Cast an element at the 6th floor before another one at the ground level. This can be a double-edged sword.

NB : All pictures and videos were taken with the author’s device, in the workplace itself. As it involves workers and the firm, they are placed under licence CC BY-NC-SA.